My Experience With Snap

The first thing I learned was how to do a game with coding. The "Whack A Mole" game with the Alonso figure was easy to learn how to do. We experimented and found out how to use the coding blocks that can be used for almost anything. One of the codes we learned how to use is the "go to" block to make Alonso move anywhere on a coordinate graph.


During my experience with snap we learned how to do a lot of shapes. The key to making shapes were the angles and the amount of moves you chose. It was a fun when we got to play around with the shapes. When I was messing with the blocks I made a star, then I clicked it various times to create this piece. It's simple but I like it because it reminds me of an optical illusion and the color is bright. 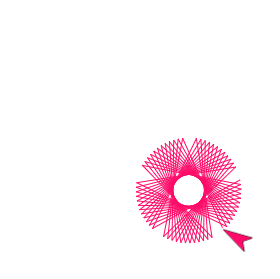 This script is to make an octagon. There are two pairs of two blue blocks and a green block. In the first pair, the green block sets the pen color to black. It will make four different lines each seen with the two green blocks that tell the pen where to move, in this case it will take 50 steps and turn 45 degrees. The second pair does the same but in a different color. To make a hexagon the blocks have to be inside the "repeat 4" block. The green block at the very top makes the pen touch where ever it will draw, with out it the sprite would not draw. 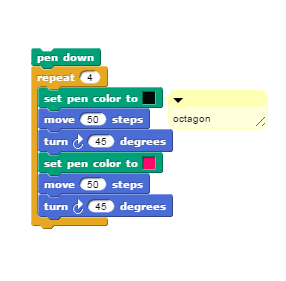